Shots’ firing overhead, out of breath, thankful to be alive, an exhausted, courageous soldier takes cover in a nearby trench. Overcome with tragedy, the cadet looks down to carefully remove his worn down combat boots to discover his feet numb and blue, knocking him back with an overwhelming smell of decay and gangrene. This phenomenon is known as “jungle rot”. With a little imagination, visualize this horrifyingly grotesque predicament as it would be in heavy metal form - teeming with despair, brutality, darkness and volatility. The sinister picture you have just painted comes to life in four-piece death metal act JUNGLE ROT, who has been triumphantly destroying the metal scene since 1994.

Hailing from Kenosha, Wisconsin, JUNGLE ROT has steadily collected fans by the thousands since their 1995 demo release "Skin The Living". Critics, blown away by their chillingly explosive live shows, rewarded the band with stellar reviews and were offered their first record deal with Pulverizer Records. Through new representation, the men released their first full-length project, "Slaughter The Weak" (1998) and were greeted by a tremendous amount of support from both the metal community and critics everywhere. Responding to a flood of new fans, the band rearranged their lineup, adapted their sound, produced new material, and began to dominate the Midwest tour circuit.

Now impossible to ignore, JUNGLE ROT inked a contract with Olympic Records in 2001, impressing the metal world with their slight hints of favorites, SLAYER and SODOM. A collection of their new material came to life in their 2001 release, "Dead And Buried", leaving fans in awe with flawless, bass-heavy production and calculated, intricate riffing. Stunned by their aggressive melodies, fans demanded a headlining tour, which came to fruition in 2008, alongside WARMASTER, DOWNSWITCH, and WALKING CORPSE.

Fresh off of their wildly successful European tour, with thousands of new supports to boot, JUNGLE ROT signed a deal with Napalm Records in 2009. Having more than a decade of experience on their side, the band released "What Horrors Await" later that year, forcing metal heads to their knees, saluting their mastery of guitar distortion and growls were seemingly delivered from the deepest pits of Hell. Summoning their primal, innermost hatred, "What Horrors Await" brought hit after heavy hit, knocking down naysayers with one swift kick to the gonads. With fire in their eyes, JUNGLE ROT toured relentlessly across the world, proving the quality of their production matched their live performance, solidifying their spot as major players in the death metal scene.

Victory Records, intrigued by JUNGLE ROT’s brand of knuckle-dragging, Neanderthal death metal, welcomed the band to their roster in April 2011. Three short months later, the guys released "Kill On Command", some of their heaviest material to date. Throwing down the gauntlet, they integrated slow stomp melodies into their speed-thrash style, bringing the band back to their death metal roots. Comprised of front-man and guitarist Dave Matrise, bassist and backing vocalist James Genenz, and lead guitarist Geoff Bub, JUNGLE ROT was back with vengeance to “take back the scene we started” Matrise contends. Their years of hard work landed them on tours with many death metal legends such as DEICIDE, ENTOMBED, SIX FEET UNDER, VADER, OBITUARY, SUFFOCATION, GOATWHORE, CATTLE DECAPITATION and more. 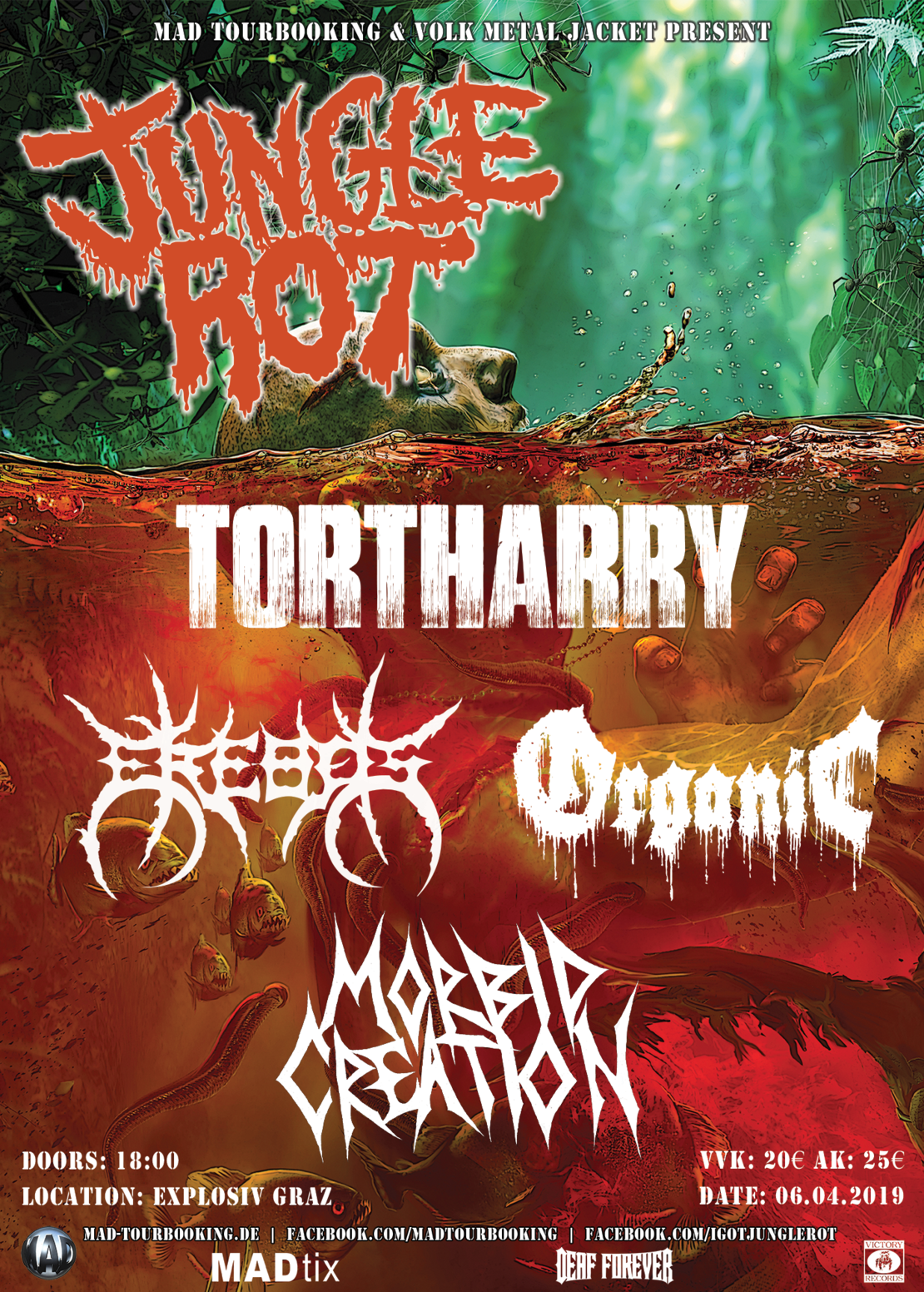